John W. Rohrs, Owner – is the CEO and co-owner of Rohrs Farms and managing member of Rohrs Leasing, Rohrs Land LLC, and RFO Management LLC. John is a fifth-generation farmer whose family and life have been built around the farming community. After spending over 28 years working and managing in the farming industry it is easy to see that he takes great pride personally and professionally in every aspect of the business. This includes continually gathering data and information as well as attending seminars, conventions and continuing his education to provide the best possible return in all areas of farming, short and long term. John truly considers farming as more than a business, it is a lifestyle that he is very passionate about. This is something that shows in the extreme attention to detail in everything from the daily operation of managing farms and work crews, all the way to the personal relationship he has with land owners.

John is the father of 2 grown children who are directly involved with the business and operation of the farms.  Mitchell, his son is a managing member of the farm and Hayden, his daughter who is married to Jacob Wiseman who also works in management at the farm.

John has always been proactive in business and farming, finding ways to be more efficient and profitable. Always looking for the next area to make changes in. Concentrating on the things we each do best, and finding the right person or company to partner with.

Mitchell J. Rohrs, Manager – Mitchell is a Sixth-generation farmer at Rohrs Farms. He has been farming alongside his father John and uncle Don since 2007.

Mitchell is married to Jessica and they have one son; Henry John.

He plants most of the many thousands of acres of the corn crop as well as operating and maintaining one of the three combines.

When Mitchell is not being hands on in the fields, he greatly contributes to the planning and organization of the planting. This involves identifying and selecting corn varieties for each farm.

Mitchell is always taking advantage of today’s technology and software to track what was used for each farm year to year to get the most productive and efficient outcome.

Mitchell is self-driven and considers his position with Rohrs Farms as a career and not just a job.

Matthew Henicle, Manager – Matt was born in a military family, so he moved around a lot while young. He was born in Kenton, Ohio before having to travel to a few different states. His father retired from the military base in Kentucky and moved off base to Tennessee, where Matt graduated high school in 1997. Farming was always something he has loved. His uncle farmed in Forest, Ohio where he spent a lot of his summers, helping his uncle out on his farm.

Matt also worked on a tobacco farm for seven years in Tennessee before getting married in December of 2002 and moving to back to Ohio. He had his first son, Brandon in 2004 and his second son, Jonathan in 2008.

Matt started at Rohrs Farms as a farm hand and was able to plant beans his first year and has been planting them every year since. A few years later, he moved up and got to start running combine. In the winter he manages the shop and in the summer, he manages the grain production. Matt is currently going into his 16th year at Rohrs Farms. He really enjoys what he does at the farm and enjoys the people he works for and with.

Jacob Wiseman, Operator – Jake has been at Rohrs Farms for several years. He is originally from Fremont, Ohio, before coming to Lima to further his education. While there he came to Rohrs Farms looking for employment.

Jake is married to Hayden and they have three children; Emma Christine, Hudson Allen, and Charlotte Ruth.

Jake does quite a few different things throughout the year. In the spring he helps run the carrot planter and does early spring spraying on cover crops. Planting season he also sprays and runs the third planter, planting corn and also soybeans. In the summer he’s back in the sprayer until harvest. During harvest he spreads fertilizer, and runs a little bit of combine, and drives truck, hauling grain both from the field to the grain facility, and also hauling to end users. 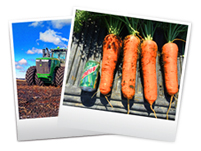